Many people ask me ‘Aren’t you afraid of sharks?’, and as a girl who has had cancer four times in four years and who recently has been told that her condition is terminal, I have to admit that I’m honestly not really afraid of very much of all.

Call me crazy, but the closer I can get to sharks, the happier I am. When one accidentally knocked against my leg during this encounter at Osprey Reef in the Coral Sea and almost sent me flying from my coral perch 3 metres away from the feeding platform, that was pretty close to the highlight of my life. (At this point, I must offer a heartfelt thanks to my new friend Bob Halstead who kindly directed me to an incredibly up close and personal vantage point for this Bucket List dive 🙂 )

For me, the best thing about diving on the outer Great Barrier Reef and further north into the Coral Sea is the opportunity to swim with reef sharks on virtually every dive. I’ve dived with sharks many times before, including the world-famous bull shark feeding dive at Beqa (pronouced ‘Benga’) in Fiji – my video from that dive is also on this blog for your viewing pleasure, under the ‘Videos’ tab 🙂 Personally, I preferred the intimacy of the shark feeding experience at Osprey Reef.

I appreciate that the practice of shark feeding is not without controversy, but I believe that both of the experiences I’ve had have been highly respectful of the needs and natural instincts of the sharks. In particular, only a very small amount of food is used to attract the sharks in the Coral Sea.

You might expect close encounters with a shark (or closer to fifty, like shown in this video) to make the heart race in a rush of adrenalin. Mine doesn’t. My breathing slows as my bliss descends. I find that I am truly in my element.

Despite their fearful, Spielberg-inspired reputation, most sharks are extremely timid and will shy away from people underwater. Occasionally swimmers and surfers (who resemble turtles from underneath) might be mistaken for a legitimate food source by a hungry shark that is simply following its predatory instincts as an apex predator in its own natural environment.

In terms of worldwide fatalities, falling coconuts are responsible for around 150 deaths annually, champagne corks kill 24 people each year, almost 6,000 people die from tripping and falling in their homes. Similarly, cows, bees, horses, vending machines, ladders, ants and dogs are all responsible for far more deaths each year than sharks. 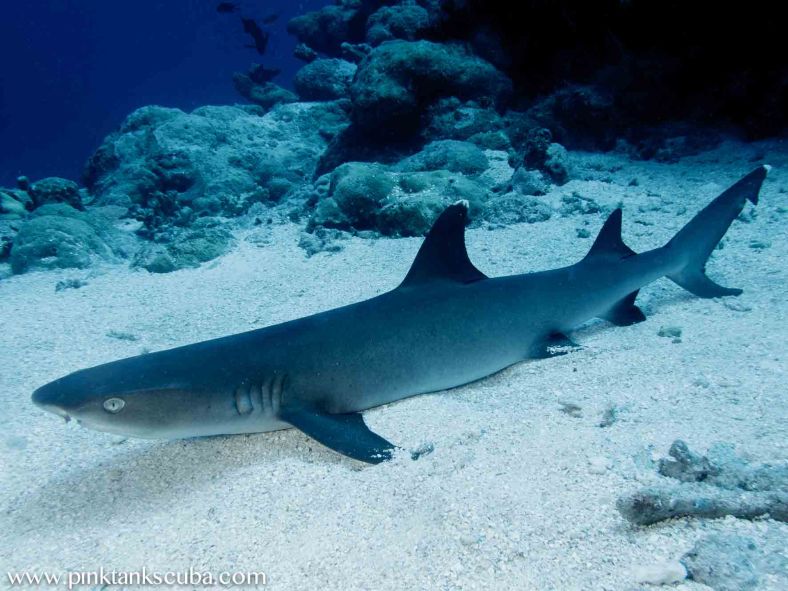 One of many very chilled out white tip reef sharks.

On average, there are fewer than 5 shark related human fatalities worldwide each year. By contrast, it is estimated that more than 100 million sharks are slaughtered by humans every year as a result of fishing and misguided culling programs that ultimately do nothing to enhance human safety. As with everything in this world, a little bit of education provides a lot of much needed perspective.

Each time I enter the ocean to spend time with the creatures who live there, I am a visitor in their world and I take a calculated risk. Am I scared that a shark might eat me? No. My oncologist said I am likely to die within 5-11 months from advanced, recurrent, metastatic endometrial cancer. He was 100% certain about this (though in my optimism, I am less certain). He said absolutely nothing about sharks. Now where are those Great Whites so I can cross another item off my big old Bucket List? 😛

ps Tank you for taking the time to visit my blog! Please check out some more of my ‘Scuba versus Tumour’ underwater adventures while you are here. And don’t forget to like Pink Tank Scuba on Facebook!

ppps Apologies to my beloved dad Kirby for this video. He really doesn’t like me playing with sharks (in fact, he sells Shark Repellant in his Survival Supplies store!) I didn’t tell him about this part of my trip until I came home as I already give the poor darling enough to worry about. As I write this, he is getting the plaster cast off the wrist he broke the day I dived with the sea lions (that’s a really good video to watch if you haven’t seen it already!) Love you, Kirbs xxxxx