Only a few minutes into Dive 591, my focus shifts from a tiny blenny fish on a pylon to the unexpected outline of an octopus about the size of a Golden Retriever  swimming behind it (normally they are hiding somewhere in a crevice). The creature spies me too, equally surprised to have encountered a diver while out hunting for its breakfast, but intent on its primary objective. Effortlessly it climbs high up onto nearby pylons in search of small crustaceans, then propels itself back down across the sand, seeking telltale signs of unsuspecting crabs.

I have long had a theory that marine animals are only capable of three thoughts – how to reproduce, how to eat and how not to be eaten – and that they generally can only focus on one of these trains of thought at a time. Usually I find that when they are focussed on food, they are fairly oblivious to my presence and I can film and photograph them at my leisure without fear of agitating them.

And while this magnificent octopus was seriously intent on finding its next morsel, I sensed that it was also becoming a tad annoyed by my continued presence. Whether it rushed towards me purely for having sensed some doomed crab’s movement near me which it then puffed itself up like a parachute to capture, or whether its attack posture was also intended to intimidate me remained a mystery. Its colours did not change boldly in a way that might indicate that it felt in any way threatened, so I followed as it swam and continued to film the spectacular behaviour I had never encountered before from a slightly increased distance to avoid raising its ire.

Then it became very clear to me. The octopus was crouched low, eyeballing me. It had become tired of my presence and wished to continue its hunt alone. I could almost see the cogs turning in its mind, planning how it might best lose me. Although it could easily have swum in the opposite direction, it knew I could swim to keep up with it, and the look in its eyes told me exactly what it conspired to do. In the final seconds as it prepared to torpedo straight towards me as I knelt on the sandy floor, I planned my own escape path directly up into the water column. What transpired can be viewed in the final seconds of the video above, choreographed between two creatures who understood each other’s anticipated movements with crystal clarity.

The animal hurled itself towards me like a bowling bowl and scored its intended non-impact strike. I quickly filled my lungs with tanked air to float a meter off the sand as it swam straight through the patch I had been resting on, directly underneath me as I tried to keep its trajectory in focus with my camera. I have no idea what might have happened had I not anticipated the move and acted accordingly. In recent times at this dive site, bold octopuses have been known to confiscate unwary divers’ cameras. But in all honesty, the animal had given fair warning of its intent and somehow knew that I would comply. We had understood each other perfectly. It had asserted its control of the situation and I left it to continue its hunt alone. Though we clearly meant each other no harm, but the time had come to swim in opposite directions.

People are justifiably fascinated by octopuses, as evidenced by this video being viewed on YouTube over 60,000 times in the first 36 hours of being posted, quickly reaching the half million views mark and gaining worldwide media attention, causing scientists in the USA to debate the animal’s behaviour e.g. 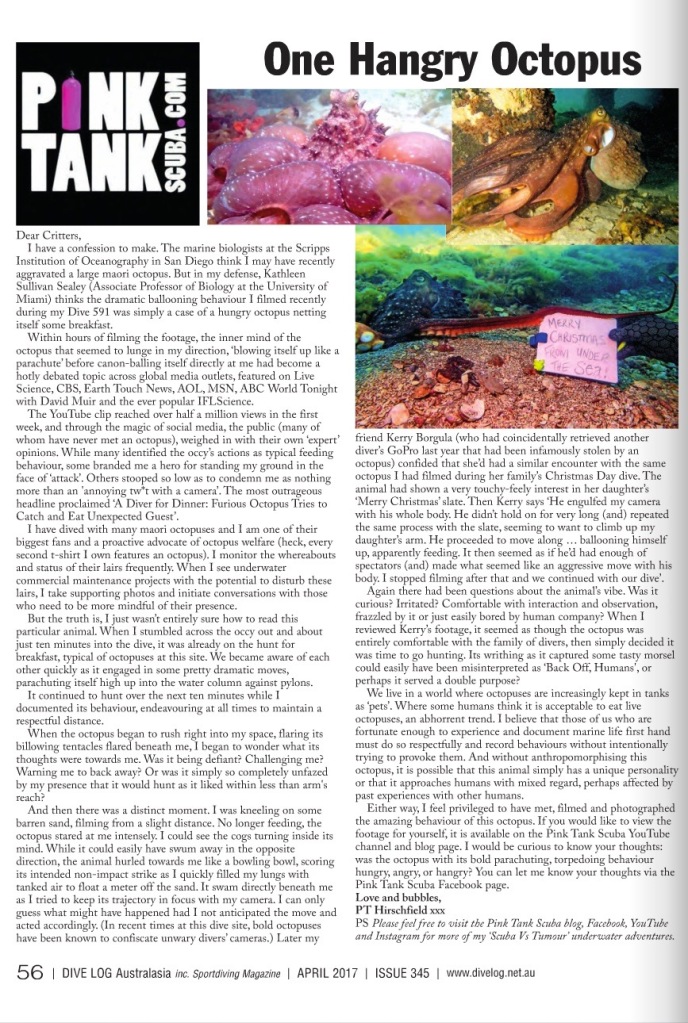 Octopuses are beautiful, intelligent, fearsome, wondrous creatures and deserve greater ❤ Love ❤ Respect ❤ Protect ❤ than they often receive. Please do not keep them in tanks. They are wild animals and the ocean is where they belong.

For MORE of my OCTOPUS images and videos, please click HERE.

To learn more about me and my ‘Scuba Vs Tumour’ adventures, please click HERE.