*GRAPHIC CONTENT WARNING* I have a confession to make. This may be the most disturbing blog piece I will ever post. It is full of videos and photographs I wish never needed to be taken and that I wish you never had to see. I have shared with you some of my favourite stingray photos, stories and videos with you previously HERE. However in February 2017 I finally realised that I could no longer see senselessly slaughtered stingrays on almost every one of my local dives without speaking out and taking action. Thankfully, many others have joined their voices together on this issue, including over 28,000 people who have signed this PETITION to ban the killing of rays in my local waters of Port Phillip Bay.  I and other members of the Project Banjo action group and Rays Awareness team  continue to have regular productive meetings with key individuals and groups such as Fisheries Victoria and VR Fish (Victoria’s peak recreational fishing body) who are committed to working alongside us towards better outcomes. Here’s a snapshot of where things are up to …

On Wednesday evening 3 May, four ‘banjos’ were caught by an unidentified fisher on Rye Pier before being dealt severe cranial splits, in addition to some having their mouths ripped out. At least one of the animals was still alive after sustaining this injury, as caught on disturbing video by local scuba diving instructor Jane Bowman:

Divers who planned to euthanise the animal the following morning found it already dead, along with a fifth banjo that had been knifed in the head. Ms Bowman had previously reported seeing 18 dead, discarded rays on a single dive at the same pier, including a less commonly seen eagle ray.

At approx 2:30pm Saturday 20 May, local diver Ruth Betteridge filmed then euthanised another mutilated banjo that appeared to have been disembowled before being thrown back into the water, landing on her head. An active member of the Project Banjo group which is campaigning for a ban on the killing of rays in Port Phillip Bay, Betteridge explained, ‘I had to film it which I don’t like and then to end its suffering which was awful’:

AJ Morton of mobile scuba school Dive2U photographed a mutilated fiddler ray on 12 May: “Another Banjo…this time at Frankston Pier. Had its mouth ripped open and left for dead for the sake of a $2 hook. Wasn’t even at least put out if its misery. Just a blatant disregard for the welfare of the animal.” Scuba Instructor Jacqui Younger photographed a banjo that had met a similar fate at Portsea Pier the following day.

On 29 April, one diver filmed a banjo at Blairgowrie Pier that had been paralysed by a knife wound, then thrown back alive:

Three days later another diver – Sam Riley – filmed the same ray still alive: “I was able to put it out of its misery after recording some video, but it is tragic to imagine the pain it would have been in over the past few days while living in such a state.’

Diver Jane Headley also shared disturbing video footage of a ray that had been chopped in half. The back end of the animal was retained or discarded whilst the front, still living end was dumped back into the water to die:

While the injuries inflicted upon these rays are particularly brutal, Melbourne-based Project Banjo are collating a growing body of evidence that such attacks against rays in Port Phillip Bay are not isolated events. Testimonials and photographic evidence supplied by the ray advocacy group are evidence that rays have been slaughtered as unwanted catch regularly for many years across the piers of Port Phillip Bay and Westernport, including but not limited to popular fishing and diving spots Portsea, Blairgowrie, Rye, Frankston and Flinders. Diver Zain Fimmel attests to having euthanised countless rays left for dead across many years of diving.

In additional to scuba divers, snorkelers and free divers who are appalled by the frequent mistreatment of rays throughout the bay, many within the recreational fishing community of Port Phillip Bay are also voicing their concerns and are supportive of the proposed bans. While the rays are considered a non-target species by most anglers, when ‘kept’, the smaller animals are very occasionally taken for food and possibly for use as bait for crab pots.

Fishing forums reveal that the large smooth rays are often taken for shark bait, and it is widely held that ray wings are often shaped into circular discs and sold as ‘sea scallops’ in some restaurants. This commercial activity would not be permitted against the recent ban of commercial fishing in Port Phillip Bay, which currently restricts the recreational capture of rays to a bag limit of five rays of any species per person per day. 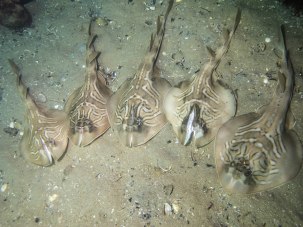 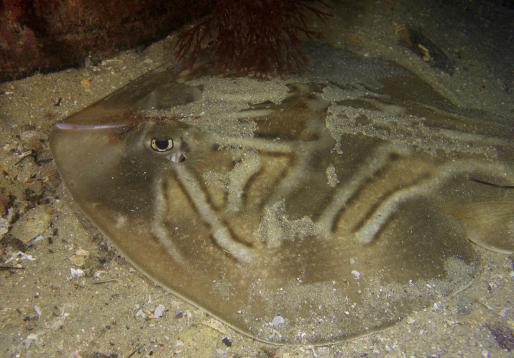 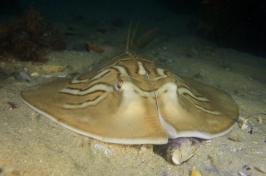 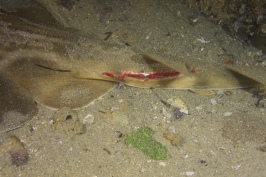 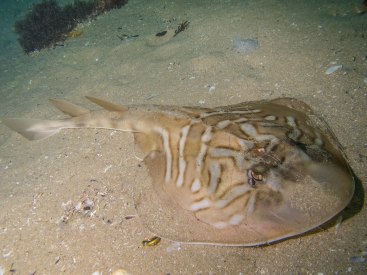 The host of TV’s ‘Talking Fishing’ program David Kramer declared ‘I think we should stop people from taking (rays) … You’re allowed to take 5 per person which I think’s ridiculous. I’m sorry and we might need to drive some change. What is illegal is that there is a Fisheries regulation that says if you’re not taking a fish to keep you must return it as best you can live into the water.”

“Now these divers have got a point. They are finding small stingrays with a stab wound to the head, thrown back off the pier … that’s illegal you’re not allowed to do that. But you are legally allowed to take a 250 kilogram stingray, cut the wings off and tail off, take it home for a feed? Needs a tidy up doesn’t it? It’s a ‘social license to fish’ – we need to do the right thing.”
This sentiment is echoed in social media by many others within the fishing and broader communities. Local fishing charter operator Fish N Trips of Mornington commented on the Rays Awareness Facebook page that they ‘would love to see the rays and skates on the protected list of marine life in our bays.’

The Australian Federal Minister for Agriculture Jaala Pulford stated in her reply to Project Banjo, ‘I share your concerns about the need for fishers to respect and treat fish humanely.’ Representatives of Project Banjo have met with Fisheries Victoria Executive Director Travis Dowling who reports directly to the Minister, Director of Education and Enforcement Ian Parks and Fisheries Victoria Director of Policy and Licensing Dallas D’Silva to discuss ways in which the socially unacceptable treatment of both wanted and unwanted rays can be addressed.  The regulatory body has acknowledged the need for signage to be displayed at the fishing end of piers in response to clear community concern, and for further measures to be developed involving processes of community consultation. Discussion between the stakeholders has taken place around broader community awareness, educational initiatives, monitoring efforts, issuing of fines for offenders and potential regulatory reforms.

Supporters of the Project Banjo ‘Stop the Senseless Slaughter of Rays’ petition have called for more immediate interventions while mid to long term solutions are being discussed and developed. Virginia Sliedricht of Brisbane, Queensland says, ‘I know the wheels of progress move slowly but in this case it needs a little hurry up’. Rob Rowe of Western Australia urges, ‘The Victorian Department of Fisheries should be doing all in their power to monitor this situation and penalise those who are apprehended as a result. This is barbaric behaviour of the worst kind.’ 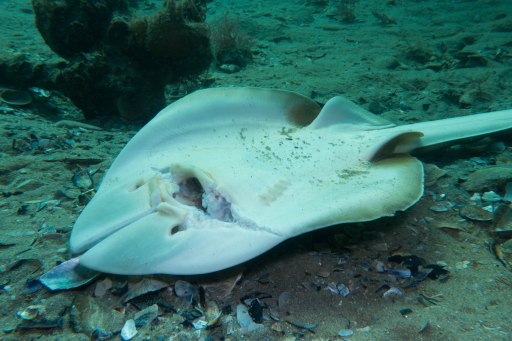 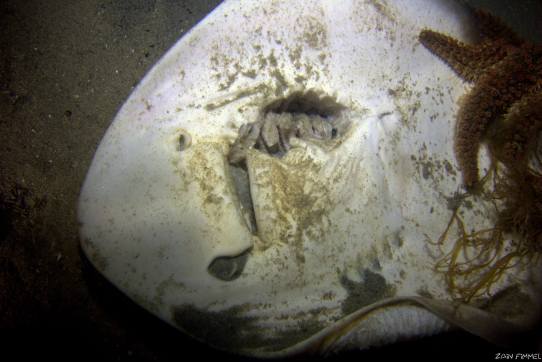 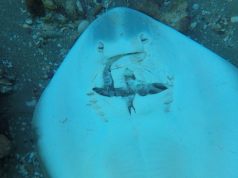 In response to recent evidence of banjo deaths, the CEO of peak Victorian recreational fishing body VRFish, Michael Burgess says “VRFish encourages all fishers to return unwanted rays to the water unharmed and comply with fishing regulations. We all need to work together to stamp out this unacceptable and illegal behaviour. Rays play an important role in maintaining healthy marine ecosystems and are like the vacuum cleaners of the ocean floor. If fishers observe illegal fishing activity, including the deliberate harming of non-target species such as rays, toadfish and native seastars, they should report instances to Fisheries Victoria on 13 3474 (13FISH)”

Sadly, the mistreatment of rays is much broader than the situation being spotlighted in Port Phillip Bay. Individuals and lobby groups across Australia such as ‘Supporting Sharks and Rays in SA’ are collating growing bodies of evidence of long-term abuses against rays and campaigning for regulatory responses. It is hoped that the current progress being made towards collaborative solutions in Victoria can be leveraged towards greater protections for these significant marine animals across the country.

Friends, we’ve all been seeing these travesties for far too long without taking action. We are now determined to see a win-win outcome for all stakeholders – for locals, visitors, tourists, fishers, divers and the rays themselves. Port Phillip Bay is a gorgeous place and the rays are a huge part of what makes the bay so special. No-one is willing to sit back and just watch more of them being senselessly mutilated and slaughtered. It’s time to ‘rays awareness’ that these animals have so much more value alive than dead.

There’s nothing more amazing than seeing a huge smooth ray or a gorgeous banjo gliding beneath the piers or in the shallows, and nothing more tragic than seeing them chopped up and discarded like garbage. Port Phillip Bay should be recognised as a beautiful ‘Bay of Rays’ that needs to be celebrated and protected. 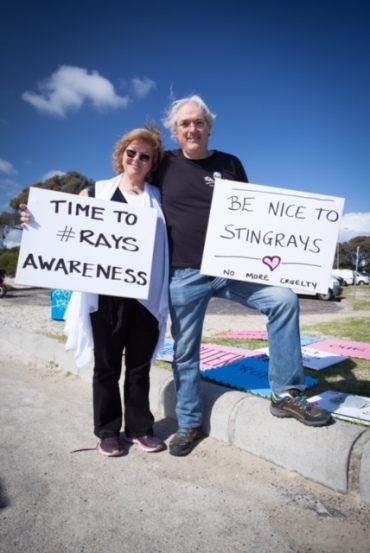 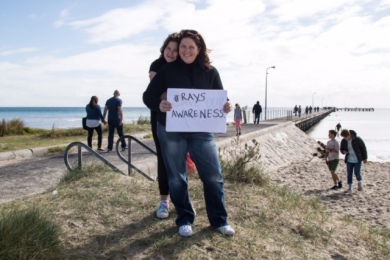 Here is just a small sample of the media coverage of this issue to date:

If you’ve read this article this far, chances are you care enough to help make a difference on this issue? Please sign and share the PETITION and speak out proactively against this wanton inhumanity. There is so much wrong with this world, but if every person begins to speak and be proactive on the basis of their convictions, we just might start moving in some better directions towards better outcomes. Will you please help to give these voiceless victims a voice and dare to make a difference? Every voice counts. I encourage everyone who follows this blog to consider how you might be able to stand up to make a difference on this issue or another issue that is close to your heart and conscience.

9 thoughts on “Time to #RaysAwareness”